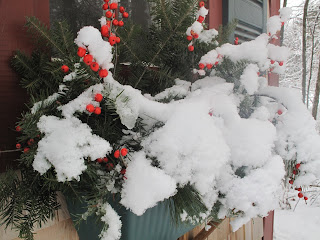 We will be having a white Christmas here at Dog Trot Farm. December is a bittersweet month for me.... it is the month which holds my birthday and sadly the month which claimed both sets of grandparents.... and now my dear mother in-law. In the spirit of Christmas hold your loved ones a little bit tighter..... remind them how much they are loved. Merry Christmas from all of us here at Dog Trot Farm and Blessings for the New Year.
Posted by Dog Trot Farm at 8:31 AM 15 comments:

The snow is softly falling....the wood stove working overtime....my girls are snuggled in their coop....and Winslow Homer has a full belly....all is right with the world. 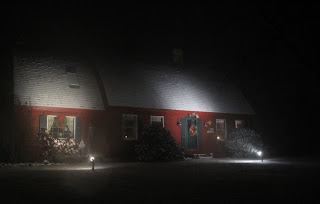 ONCE UPON A WINTER'S EVE

Yesterday I turned another year older....and that is all I'm going to say about that. Amen. In honor of my birthday my husband took me to Strawberry Banke to partake in the Holiday Candlelight Stroll. Strawberry Banke is a historic museum located in Portsmouth, New Hampshire. 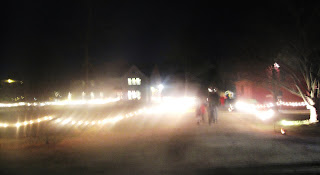 The museum consists of 32 buildings on their original sites in the neighborhood of Puddle Dock. Many of the homes were decorated for the holiday season according to a particular era. We first were greeted by St. Nicholas in the Rider-Wood House, an early 19th century home of English immigrant and widow Mary Rider. At the Chase House an 1818's mid winter dinner party was happening with live harpsichord music in the formal parlor. At the 1870 Goodwin Mansion, Governor and Mrs. Goodwin had made a wonderful maze of colored ribbons on the Christmas tree-each leading to special color coded gifts for each individual child. The year was 1943 at the Marden Abbott House /Store where the family was preparing a special dinner to welcome home their soldier son who was on leave for Christmas. At the Shapiro House the year was 1922 and featured the family celebrating the last evening of Hanukkah with special food, games and music. At the Masons Historic Lodge-Pitt Tavern soups and hot drinks were available, a perfect amenity to a cold winter's evening. The Candlelight Stroll is a wonderful event to put one in the holiday mood. You will find musicians in many of the homes, carolers singing as you stroll along the dirt paths illuminated by candlelight. Warm spiced cider and hot chocolate were available and a bonfire to warm your bones.... In my case "old bones." If you have never visited Stawberry Banke place it on your list of places to see.... in my case I refer to this as my "bucket list". In summer the flower and vegetable gardens are amazing here and are especially enhanced with the view of Portsmouth Harbor and the smell of the ocean air. Thank you sweetie for taking your "old lady" out on the town.... it was a wonderful evening.
Posted by Dog Trot Farm at 11:38 AM 23 comments:

There is nothing finer to do in December.... when temperatures dip....and also to put one in the holiday spirit.... than attend The Radio City Rockettes Christmas Spectacular.... which was presented at the Wang theatre in Boston. 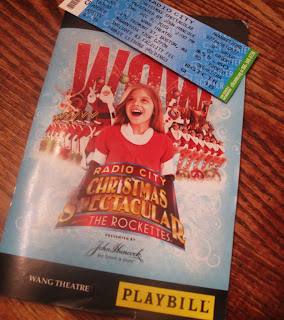 My mom and aunt treated myself, and four cousins to this wonderful Christmas event. We boarded the Downeaster (train) and arrived in Boston two and a half hours later. What a convenient way to travel to the city.... no white knuckle driving.... If you have ever driven in Boston I am sure you understand what I am speaking of. As always the Rockettes did not disappoint. I have attended the Rockettes performance at Radio City Music Hall in New York City....but the Wang Theatre is just as beautiful and the Rockettes simply magnificent. One of the most magical moments for me is "The Parade of the Wooden Soldiers"....A precision military marching routine which has been performed in the holiday show each year since 1933. The most heart moving scene is "The Living Nativity" which upholds a tradition begun by St. Francis Assisi in 1223. This also has been a part of the Christmas Spectacular since 1933. Let me just say there was not a dry eye in the theatre....simply breath taking.

Winslow Homer is patiently waiting for Santa....We have begun to make progress with his diabetes....for two weeks now he has maintained his weight and his blood sugar has dropped from 500 to 298.... 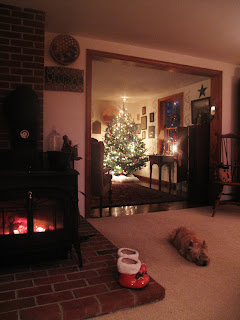 The days are passing quickly....every moment is precious....There are Christmas cards to send....presents to wrap.... presents to mail.... baking to accomplish....and loved ones to visit....it is a time for family and home. I'd rather be nestled here at Dog Trot Farm than any other place in the world....I am sure most of you feel the same way about your hearth and home. The lights of the Christmas tree are glowing....candles lit....a wood fire burning....and a pot of cloves and cinnamon boiling on the wood stove....tell me is there anything finer?

As with most of you.... finding the time to blog and do a days work is becoming most difficult.... especially since the Christmas holiday is just around the corner. Now.... I am not sure what proper blogger edict is....I do read my follower's blogs faithfully....and comment regularly....however.... lately it hasn't been everyday....Oh the guilt one feels....I know some of you feel as I do. Please know I truly appreciate each and everyone of you and eventually I will catch up with all of you....my dear sweet blogging friends. 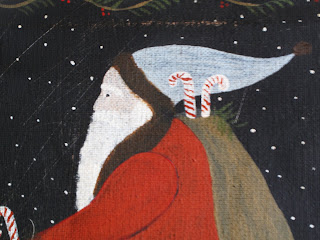 This photo is of a canvas painting.... titled "Candy Cane Santa" by Lori Brechlin of Not Forgotten Farm. I entered Lori's giveaway and unbeknown to me I won! A week had gone past since I had last visited Lori's blog and the winner announced ...ME! See....I was playing blog catch up.... 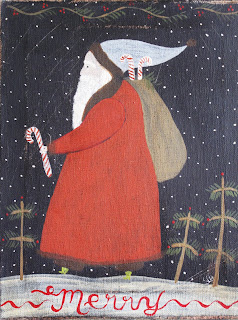 Lori's blog is one of the first primitive blogs I discovered and a favorite. I am in awe of her art and creativity and someday hope to visit Not Forgotten Farm and meet Lori in person. So....Lori thank you for my wonderful prize.... it will hold a place of honor in our humble home. Now.... off to begin the Christmas shopping....oh and Winslow Homers weekly date with Dr. Rust....

THE SHAKERS OF NEW GLOUCESTER

Below.... the welcoming committee for the Shakers of New Gloucester Maine. 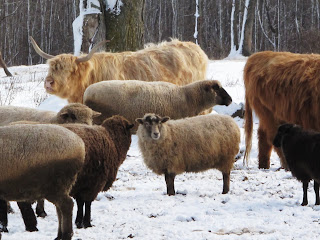 Ten o'clock....friends of the Shakers were in line with tote bags and ready to shop....This is our fourth year attending this holiday fair. First year.... DH and I stood in line THREE hours to purchase the famous Shaker "ROSEMARY BISCUITS." Tender, soft and flaky they were.... however.... not to our taste....the rosemary DOMINATED the flavor of the biscuit. I was very disappointed and you can bet my DH won't be standing in line for three hours for ANYTHING again. Second year.... FRUITCAKE. There happened to be an article in our local newspaper regarding the DREADED Christmas fruitcake....the paper guaranteed that any fruitcake "nay sayer" would fall for the fruitcake offered by the Shakers. No long line for this baby....Now I am not a huge fan of fruitcake however.... I was willing to spend the fifteen dollars....yes you read that correctly.... for this loaf cake. I had to find out for myself if this cake was everything the newspaper made it out to be... It was good....more cake than fruit....and the fruit was large chunks....my one and only complaint....too dry.....it did get eaten. The Shaker fair also offers quality hand-made goods, herbs and spices, yarn, books, paintings, ornaments, etc. I just realized I can't show you my goodies as I am sending them to friends and family for Christmas. You'll just have to wait till after the holiday for a peek. 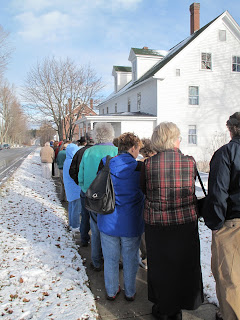 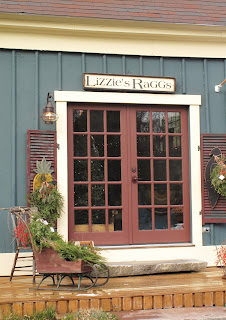 This is the door prize I won.... a very sweet little woven pillow. I also had a nice chat with the shop owner....who is a very sweet lady herself. You have one more week to visit Lizzie's Rags before the shop closes for the winter....otherwise you will have to wait till spring. 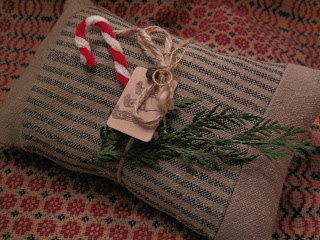 Hope everyone had a great weekend....the days are flying by....
Posted by Dog Trot Farm at 7:11 PM 8 comments:

As my feet touched the cool morning floor.... 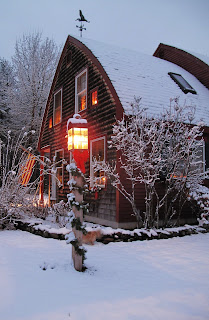 something caught my eye with the new dawning light....tis snow....

an early morning surprise....winter has arrived in Maine....it is December after all.... 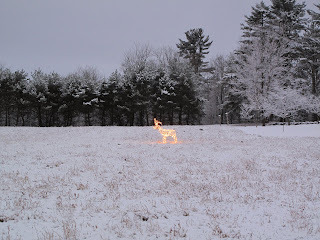 the perfect accent to a Saturday morning drive to attend the Shaker Village annual Christmas craft fair....Oh, yes and off to Lizzie's Rags where I won a door prize....I can not recall what the door prize is, but am sure it will be primitively perfect. Will share my winning prize with you later this evening....Blessings to all.
Posted by Dog Trot Farm at 7:21 AM 23 comments:

"November comes and November goes,
with the last red berries and the first
white snows.
With night coming early,
and dawn coming late,
and ice in the bucket, and frost on
the gate.
The fires burn and the kettle sing,
and earth sinks to rest until next spring." 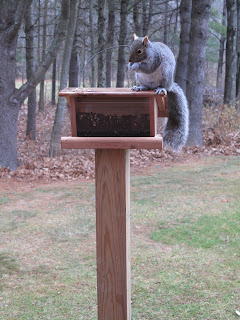 My little squirrel friend Skippy left the shelter of his pine tree this morning to pay us a
visit.... and also indulge in breakfast. I enjoy watching Skippy's morning antics as does Winslow.
Unbeknown to Skippy he has become an intricate part of Winslow Homer's healthily living program. Monday we had our weekly visit at the veterinarians office. I am afraid I had placed my expectations to high. Winslow once again had lost weight.... two ounces.... his blood sugar level at 500. Needless to say I had hoped for better news. Yet again I was reassured that this scenario might be the routine for awhile.... his insulin was adjusted. Now.... there are some days when Winslow Homer is rather quite.... which is highly unusual for my feisty little dog. Enter Skippy the squirrel. If I mutter the word "squirrel".... spell the word "s-q-u-i-r-r-e-l" or now say the name "Skippy" Winslow's ears perk up and he is off on the run....out the door just as fast as his little legs will take him. Skippy of course always reaches the safety of his pine tree and Winslow Homer quietly sits below now on "squirrel duty". This is a good thing.... this is the Winslow Homer we know and love. So this evening I just want to offer a big THANK YOU to Skippy the squirrel.... I will make sure Santa leaves a special treat for you....peanuts....suet....anything your little heart desires.
Posted by Dog Trot Farm at 5:20 PM 17 comments: