First, I must start at the beginning. Last night I watched a program on PBS about people and their amazing chickens. The first story told of a chicken named Valerie and her owner Janet Bonney, who resided in Harpswell, Maine. In February of 1995 Janet found her hen under the front porch of her home frozen. Janet brought the chicken inside and attempted to place her into a shoe box for burial. Valerie being so stiff that her leg's would not bend - Janet began to warm her body slowly with a hot water bottle. After fifteen minutes of doing so Janet noticed the little hen take a breath. For the next three hours Janet warmed the little hen's body and gave mouth to mouth resuscitation. I promise this is true! Once completely warmed Valerie stood, clucked and decided she was no worse for wear. Over time Janet did state that the once scraggly hen evolved into a beauty and noticed the pecking order in the hen house had consequently changed in Valerie's favor.
Next was the story of Mike the rooster who lived 4 1/2 years without a head. His story began in the 1940's as told in Life and Time magazines and holds a place in the Guinness book of world records. Mike was intended for the soup pot. His owner chopped his head off, but Mike ran around the barnyard as chicken do, but Mike simply would not die! Seeing Mike's determination to stay alive his owner provided food and water via an eye dropper. Mike was given constant care however, died after chocking on a kernel of corn when his owner had forgotten the eye dropper. Scientist determined Mike survived because his brain stem had been kept intact and also from the quality of care provided by the family. Now my story. The photo below is the posture of a hen who knows danger is lurking. Tail feathers out, neck stretched, intently listening. 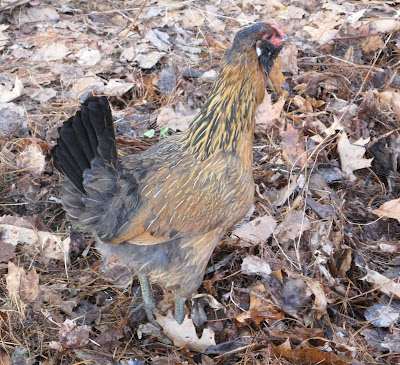 Today, the weather was perfect: sunny and warm. The girls were let loose and enjoying the day running around the yard. Winslow Homer and I were in the backyard too. The girls were just slightly behind their coop. All too quickly circumstances changed, a cluck turned into an all out warning, feathers flying and girls scrambling. A fox snatched not one, but two of my girl's! I could not believe what I was seeing, the fox began dragging both Buffs across to the next field, but eventually did drop one, Iris. My heart sank as I watched the fox leave with Charlotte in it's mouth and eventually out of my sight. How did this happen? The day being so perfect, I was right there, but yet saw and heard nothing until it was too late. Winslow by this time was on the run, back tracked around the field in the direction of the fox and deep into our woods. 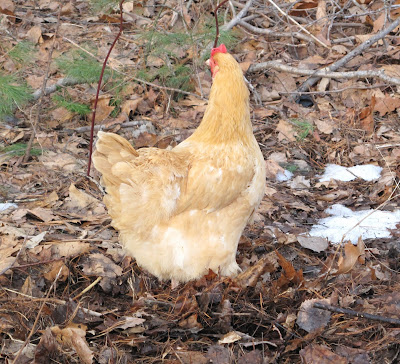 Poor sweet Charlotte, I felt I had let her down I was unable to rescue her. 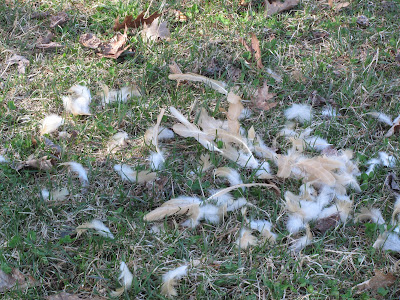 It made me ill to see her beautiful feathers scattered about. I hoped her demise was overly quickly. Winslow returned and the fox circled around and eventually disappeared. I gathered the girls and put them in their pen. A sense of sadness filled the air. I sat outdoors with the girls for awhile offering extra treats, reassuring them things would be okay. A neighbor happened to stop by after he had encountered Winslow running through the field and wondered if something was wrong. I explained what had occurred. He felt bad as he too has chickens, but stated that he does not let them free range. I now need to think twice about that. We mulled over the situation and then said our "good luck" and "goodbyes". I gathered my gardening supplies before heading indoors for dinner when just over by the back of the house and protected by the lilacs........................... 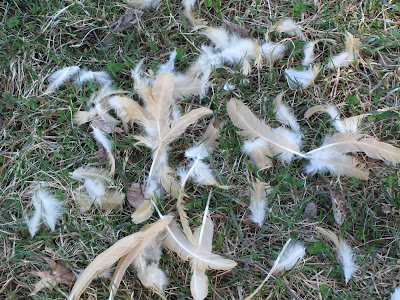 I saw a Buff. "Honey one of the hens is loose", but wait a minute, I counted combs and to my amazement all nine hens were in their pen, how could this possibly be? I saw that fox take my girl in her mouth and carry her across the field deep into the woods. 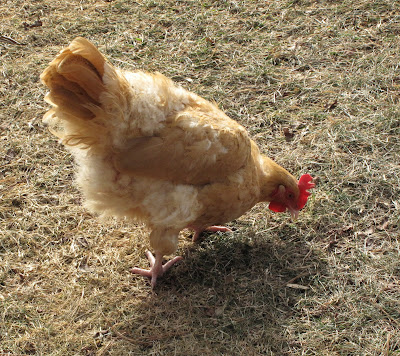 But it is true she is alive! Lost a lot of feathers, one wing is sore, and she limps, but she is alive! Somehow she escaped the wrath of that fox and had the fortitude to travel in the right direction home, home to the safety of her pen and her sister's. Charlotte is my amazing chicken.
Now, I realize what you are thinking that this is April Fool's Day, but this is a true story, a true story with a happy ending. It also happens to be the birthday of my late maternal grandmother and she too loved chickens. I told my girl's, girl's you have a guardian angel watching over you, thank you Grammy Lile. Of course it doesn't hurt to have Winslow Homer on your side!
Posted by Dog Trot Farm at 6:45 PM 24 comments: