Emma Lou has decided to become an adoptive momma. She still is unsure of all the commotion going on in that big brown box, but decides to spend her days sleeping beside the chicks. As in sleeping on the bed which is beside the chick's condo unit. She keeps a tentative eye on all the wing flapping, hen scratching, sprint running, furry beings. I know what your thinking Emma, but I do not know how these little beings are creating so much dust! 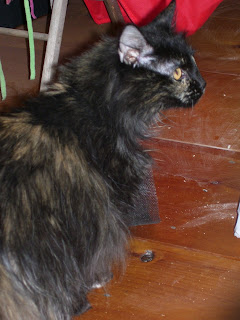 The girls are enjoying their added space. Willa is the first to try out the roost, she is the smallest and the feistiest. They now perch on their food and water feeders, what one does the others soon follow. 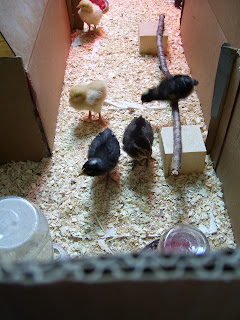 The four Buff chicks are the loudest, the two Ameraucanas are the friendliest, and the four Barred Rock the feistiest. 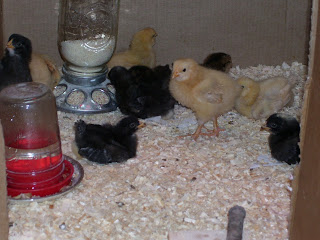 Wing and tail feathers are growing in, the temperature of the brooder has been lowered, the chicks don't seem quite as fragile. We try to hold them everyday, however, as of yet no one wants to sit on a lap. Pip will now feed out of my hand, the rest are content to watch. 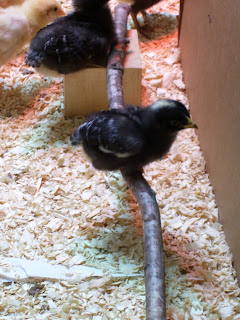 Here's little Willa practicing her high wire act. After this photo was taken the rest of the chicks gave it a try. Then all in unison they peered up at me and decided it was time to fly the coop.
Wings were flapping and a grand attempt was made, but the screening was in arms reach and quickly placed over the lower end of the condo unit. That was close. "Honey I think you better work on the coop today." Till next time.