While walking through the Fryeburg fairground's my husband and I came upon this exhibit. This display is of two bull moose with their antlers intertwined. 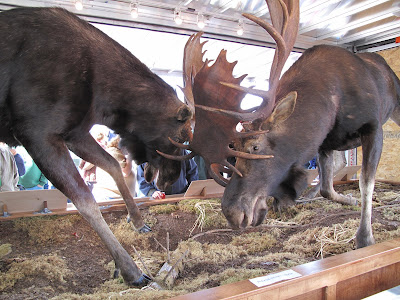 In May of 2006, Adella Johnson of New Sweden Maine, a small town located in far northern Maine found the remains of two bull moose. She had smelled the odor of an animal rotting and discovered the bull moose in a bog near her family camp. The moose had died intertwined the previous fall. Adella claims it is not uncommon to see moose walking up driveways and along main streets in New Sweden, especially in the fall. 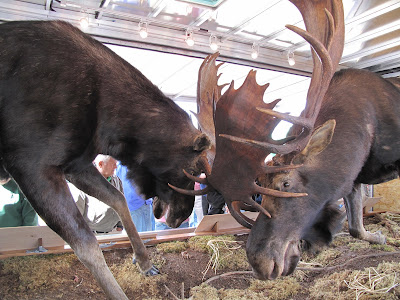 Johnson ( Adella said she really would like to put the antlers in her camp) called the Warden Service opting to donate the moose to the Department of Inland Fisheries and Wildlife. L.L. Bean and the Department partnered together to create this display. The display is one of only two in North America, New Hampshire has the other. L.L. Bean donated more than $50,000 to bring this exhibit to life. Mac Mckiever L.L. Bean's senior public relation representative said the display is very "magical and grand, just in and of itself," "It features one of Maine's most endearing icons, the moose." The display was unveiled a month ago at Bean's Hunting Exposition located in Freeport, Maine. We found it to be a truly amazing sight.