This is "Ollie". I hooked him a few years ago. I dyed the wool and added a wool stem. He is patiently waiting for "Jack" to join him. Since today is cold and rainy, it's the perfect day to stay indoors close to the wood stove and hook. 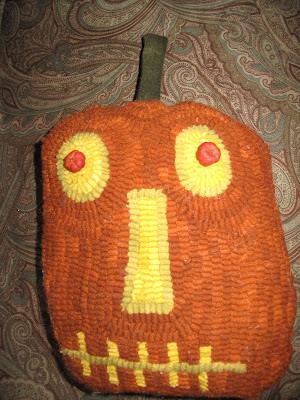 Jack is more than halfway completed. I need to cut the backing, stuff him and add a wool stem. Then he will be ready to join Ollie and his pals. 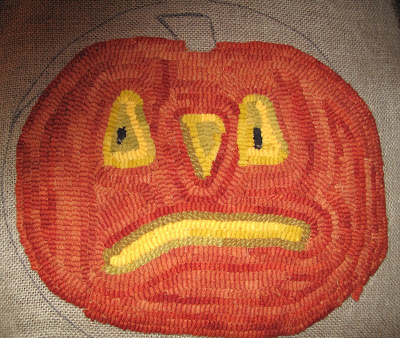 Egg production is really picking up here at Dog Trot Farm. The first egg was laid one week ago today by Willa. Since then I believe all the barreds are laying. On Wednesday with much fan fair Miss Pearl laid her first egg. This event has positively confirmed she is not a "he". Her antics began Wednesday afternoon. The girls were out foraging in the yard per usual when all of a sudden Pearl started honking, squawking and running (like a chicken with her head cut off) She ran inside the coop, under the coop, and proceeded to do laps around the pen. At first my inkling was Pearl warning me of a predator. ( I did in fact find a chipmunk in the coop, but once it saw me it promptly ran away.) Pearl still continued with her odd behavior till I realized she was trying to inform me she was ready to lay. All the girls were rounded up and put in the coop and a short time later I went to check on Pearl and low and behold in the outside run was a blue egg. 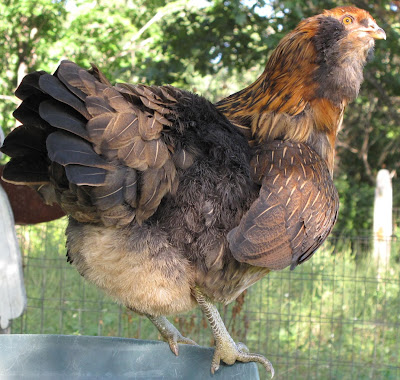 Thursday afternoon I happened to notice both of my Ameraucanas sitting side by side on a branch in their outside pen and together, simultaneously laid their eggs. Again outside. 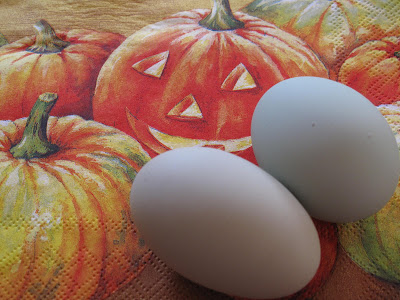 Yesterday while all the other hens were out in the yard Willa was in the corner of the coop feathering her nest- making her sweet sing song sound. I quietly sat and watched. 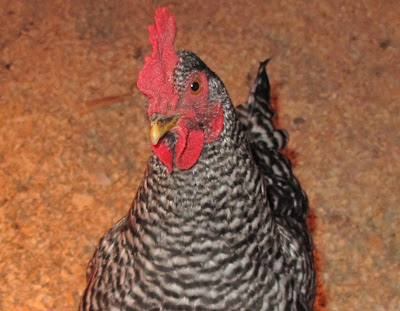 The event took all of a half hour. Willa would add chips to her nest and then proceeded to slowly rise and squat numerous times. Then the egg just "plopped" out. She looked at it, squawked and ran out the door. I felt honored to have been allowed to watch such an event. 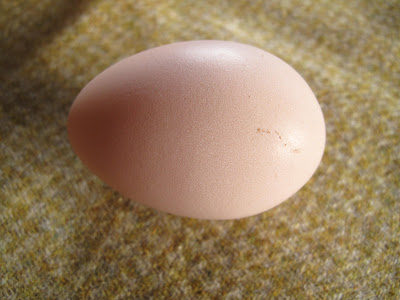 Needless to say I have been baking up a storm and the majority of eggs have been doubled yoked. Thank you girls, who knew keeping chickens would be so much fun. Now if I could only get them to use their nest boxes!