Today's weather was dismal to say the least. Heavy rain and howling wind caused major power outages to a large portion of the state. Schools closed, roads flooded and trees came down. Fortunately for us our electricity returned in the early morning hours. Winslow and I however, elected to remain nestled in. I lit the wood stove and placed a pot of spices on top which soon had the house smelling of cinnamon and cloves. I then lit candles to add to the atmosphere and began "puttering". I cut wool for a new project, tis the season for projects and tried my hand at making "pantry cakes." Pantry cakes are a staple in primitive decorating and mine is still drying by the wood stove. Tomorrow I will show you my finished product.... also items I purchased at local craft fairs....tis the season for craft fairs, but for now I leave you with this.... 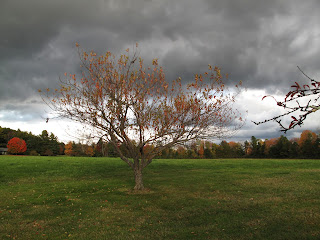 "Have you ever noticed a tree standing naked against the sky, how beautiful it is?
All it's branches are outlined, and in it's nakedness there is a poem there is a song.
Every leaf is gone and it is waiting for spring. When the spring comes, it again fills the tree
with the music of many leaves, which in due season fall and blow away. All this is the way of life.