NOT YOUR ORDINARY HIKE

This view of the White Mountains of New Hampshire was not, I repeat, was not easily obtained. 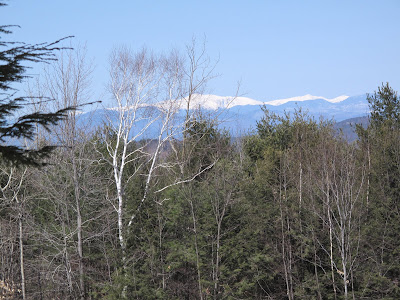 It took all my strength and determination to reach this point in our Saturday morning hike. 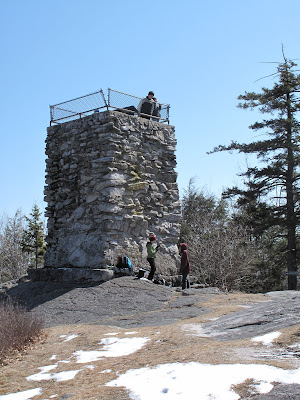 I shall begin from the beginning. Exercise we all know aids in our mental health and well being. With that in mind DH and I decided it would be a perfect day for a hike. Okay, it was my idea. We headed for Douglas Mountain which is a relatively short driving distance from our home. Forty minutes later we deposited our parking fee in the honor system box and began our trek along with a group of pre-teens and their chaperon who had arrived the same time as we. Off to the woods we travailed, birds singing, kid's happy voices in the air and Winslow Homer trotting along (still hacking from his kennel cough). We had hiked thirty minutes or so when we approached a stream. The setting was oh so picturesque. I watched as the group of kids now ahead of us mastered the moss covered rocks. They all scampered across as only kids can do, their chaperon not far behind. I approached the rocks with the same intent, but when my feet hit those moss covered rocks, I ended up ass end in the stream. My brain couldn't fathom what had just occurred, but my derriere and shoulder sure knew. All I could hear was "oh honey" DH hauled me out of the water and checked me over making sure I was indeed okay. I was, just stunned and wet. Not only were those rocks mossy, but ice covered. I elected to keep going on. A second attempt ended in the same results. Now my feet are slogging around in my hiking boots, steam rising out of my gloves, and my lined jeans are beginning to stiffen. With much encouragement from DH (and I mean much) I endured. The kids ahead of us kept asking if I was okay, and their chaperon offered me her long underwear,( there are still kind people in this world) I knew if I kept moving I would stay warm, warm but wet. I did decline the long underwear but agreed to join their group. The chaperon took me aside and informed me her kid's wanted to keep an eye on me. What a sight I was. An hour later we made it to the summit of Douglas Mountain. Thank you God. We all climbed the stone tower, took the photo, enjoyed a few minutes of conversation, I thanked everyone, and quickly made the descent down, straight down as in the route with the least amount of hazards and no flowing water over ice covered mossy rocks! 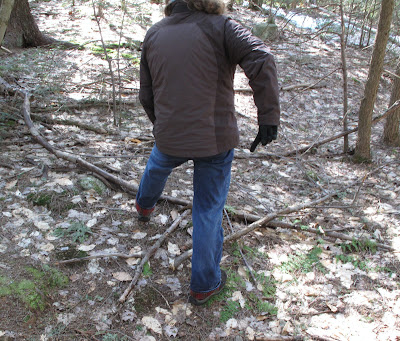 There was a reason hidden in my brain why I never wore these hiking boots and it was not till I had them on my feet and my butt in the stream that I remembered: they are "slippery soled" and now most surely a hazard to my physical well being 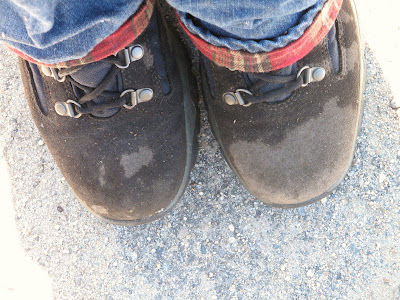 I think the boots will be much better served as a planter. I will plant "hens and chickens" in them this spring and place them on our stonewall for all to enjoy. I now am in the market for new hiking boots anyone have any suggestions? Let me just state it is never dull here at Dog Trot Farm and I have the black and blues to prove it!